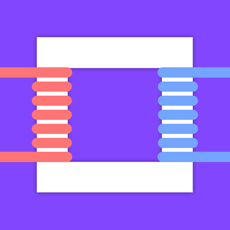 
Transformer Calculator calculate any of the parameter within the equation. Which include both primary and secondary Volts, Currents and Turns.

A transformer consists of a soft iron coil with two coils wound around it which are not connected to one another. These coils can be wound either on separate limbs of the iron core or be arranged on top of each other.

The relationship between the voltage, current and the number of turns in each coil is given by:

Get Transformer Calculator Plus for iOS from Itunes App Store