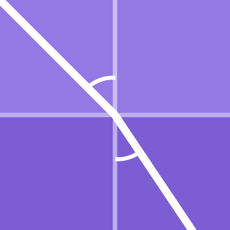 Snell's law (also known as Snell–Descartes law and the law of refraction) is a formula used to describe the relationship between the angles of incidence and refraction, when referring to light or other waves passing through a boundary between two different isotropic media, such as water, glass, or air.

Snell's Law describes the behavior of light when it encounters media having varying refractive indices. A refractive index is an expression of the ratio of the speed of light in a given medium versus its speed in a vacuum (with a refractive index of 1). I should add that light's speed doesn't actually change — it's more accurate to say that light takes a longer trip, with more delays, at full speed in glass than in air.

There is no critical angle when the refractive index of the medium containing the incident ray is less than the medium with the transmitted ray.

Get Snell Law Calculator for iOS from Itunes App Store