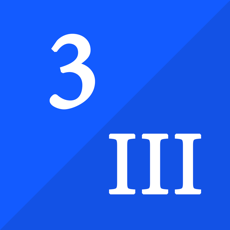 Features:
- Instant calculation
- Result are copy able to other app
- Reference are include

The numeric system represented by Roman numerals originated in ancient Rome and remained the usual way of writing numbers throughout Europe well into the Late Middle Ages. Numbers in this system are represented by combinations of letters from the Latin alphabet. Roman numerals, as used today, are based on seven symbols
I 1
V 5
X 10
L 50
C 100
D 500
M 1000
There are no letters to represent these numbers beyond several thousands

The numerals for 4 (IIII) and 9 (VIIII) proved problematic (among other things, they are easily confused with III and VIII), and are generally replaced with IV (one less than 5) and IX (one less than 10). This feature of Roman numerals is called subtractive notation.

The numbers from 1 to 10 (including subtractive notation for 4 and 9) are expressed in Roman numerals as follows:

The system being basically decimal, tens and hundreds follow the same pattern:

Get Roman Numerals Converter Plus for iOS from Itunes App Store